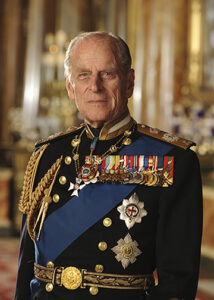 It is with great sadness that we learned of the death of His Royal Highness, Prince Philip, Duke of Edinburgh.

Known at birth as Prince Philip of Greece where he was born, Prince Philip’s father was Prince Andrew of Greece and Denmark, and his mother, Princess Alice, the elder daughter of Louis Alexandre Mountbatten and granddaughter of Queen Victoria.

Philip first met the young Princess Elizabeth when she was a child and he a boy. They married when he was 26 and they were together for a full (73) years.

Before his engagement to the Princess in 1947, Prince Philip became a naturalised British subject. He became known then as Philip Mountbatten and just before his marriage in Westminster Abbey on the 20th November 1947, when he became an Anglican, King George VI conferred on him the title His Royal Highness. Coincidentally, he was created Duke of Edinburgh, Earl of Merioneth and Baron of Greenwich. 10 years later, in 1957, he was once again given the name, Prince Philip, alongside his other titles. From 6th February 1952 when Princess Elizabeth was crowned Queen, his life became a matter of public interest. Under that public gaze, HRH Prince Philip, Duke of Edinburgh became the longest serving royal consort in British history.

Prince Philip enjoyed good health much of his life and in latter years was able to look back on a life well lived, and enjoy the fruits of a growing family, with 4 children, 8 grandchildren and 5 great grandchildren (6 in April 2021). Throughout his public life, Prince Philip has brought multiple levels of interpretation to what it means to be Consort to Her Majesty the Queen, as husband and close support but also in service to the Monarchy, Commonwealth and nation.

Given his place of birth, it seems fitting that the word, Synechdoche comes from the Greek: Syn, meaning ‘together’ and ekdoche, meaning ‘interpretation’. Thanks to the example of the HRH Prince Philip, Duke of Edinburgh, Consort will never mean only Consort, ever again.

Just one legacy of his tireless work will be the Duke of Edinburgh Award, that came about through dedication to the well-being of young people. Thousands of children have stepped up to the challenge of earning Bronze, Silver and Gold awards by accomplishing tasks that stretch fitness, courage, skills, confidence and resilience. Prince Philip drew from his experience as a boy at Gordonstoun School, where he enjoyed the ethos laid down by Kurt Harn, of developing young people through challenge. In this, Prince Philip’s legacy will live on, through the continuation of the Award itself but also through his children and grandchildren. It should be no surprise that the Prince’s Trust, founded by HRH Prince Charles has a similar motivation, to make available to the many, what has been only accessible to an elite few.

We will all have our favourite memories of Prince Philip. Dare I say he was someone who made us laugh, he enjoyed teasing and we laughed with him; sometimes it was hard not to giggle because his outspokenness got him into trouble. We can imagine that he brought a sense of fun into family gatherings, although his children will no doubt remember also, a father who instilled in them the self- discipline that guided them in later life.

We have watched Prince Philip’s zest for life with admiration. He was out carriage driving well into his 90s. ‘God is my help’, is the motto on Prince Philip’s Coat of Arms. Those close to Prince Philip and onlookers will affirm that he lived a life of service, courage, loyalty, perseverance made sharper by his time at Dartmouth Royal Naval Training College and career in the Royal Navy.

Prince Philip applied himself to his tasks with dedication, propelled as he was into a role that he defined and shaped over the years. Our heartfelt sympathies are extended to Her Majesty the Queen, for whom Prince Philip was her rock and strength as well as to their children, grandchildren and great grandchildren, wider family and friends.

Prince Philip will be missed by a great commonwealth of peoples, and not least the people of the United Kingdom, who came to value his spirit of enquiry and energy, his engaging and dignified presence for as long as most of us have lived.

Rest eternal grant unto him, and let light perpetual shine upon him. May His Royal Highness, Prince Philip, Duke of Edinburgh rest in peace.